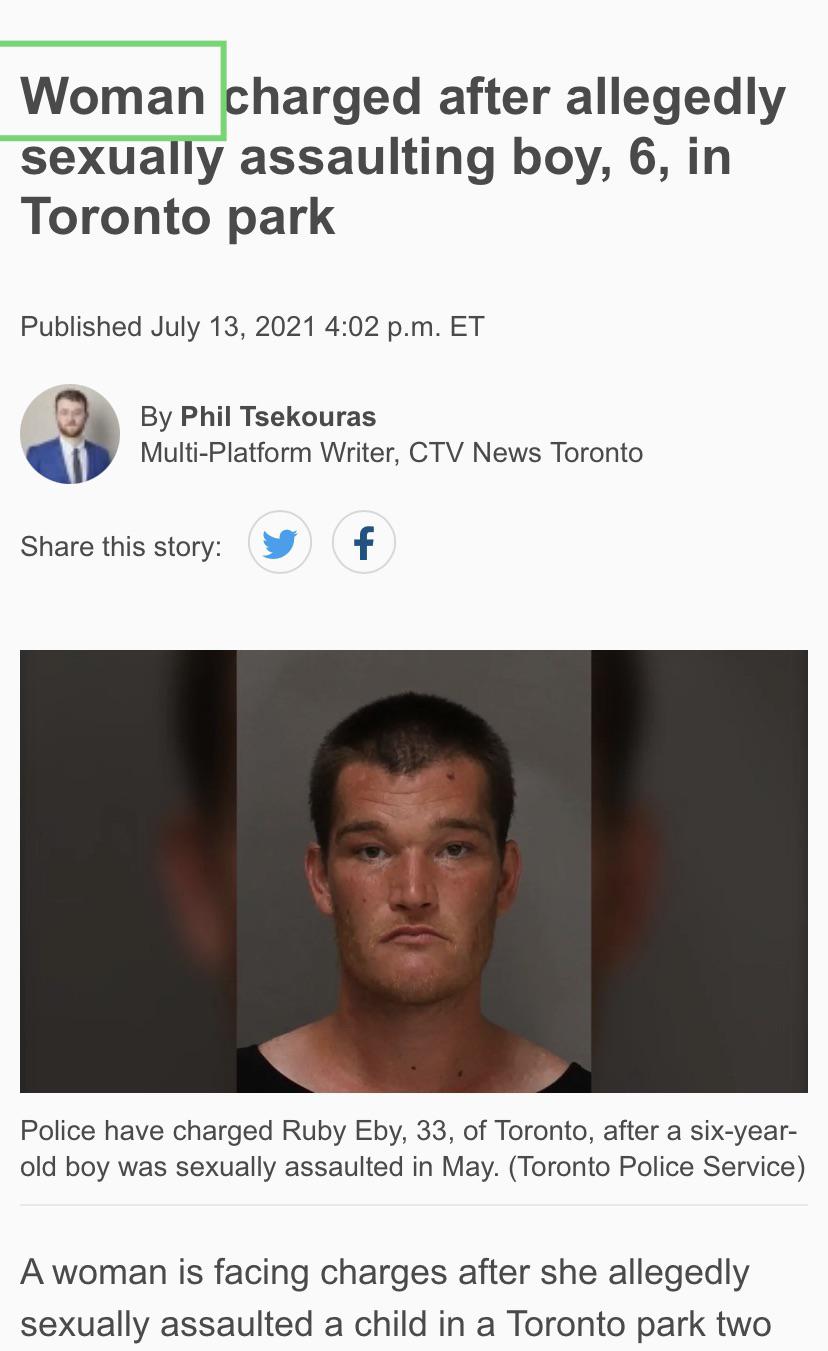 You realize cis and trans people have the same access to public parks right? Their gender doesn't matter at all.

It does when a man LARPing as a woman assaults a fucking child and makes the female crime rates rise up, stuck up twat. This isn't about gender, this is about biological sex.

Why do you care more about "female crime statistics" going up than the fact a kid was abused?

And what makes you think I care any less about the kid than the fact that a man self-ID'ing as a woman fucks up our crime stats and consequently our other statistics as a whole? Am I not allowed to simultaneously be concerned about the two issues? Do you think in a binary? Or was that just another one of your scrote tactics to make my concerns seem petty? 😂

The fact that you're whining about statistics that nobody cares about before actually giving a shit that some diseased person abused a kid. You're inventing a gender issue where there is none and using it to push against a nonexistent plot.

Yeah nah, I don't listen to fetishists who think that an opportunity to guilt trip me into staying silent will somehow make the issue any better. A pedophile used the AGP self-ID loophole to get a lighter sentence for a male pattern behaviour crime and consequently fuck up female crime statistics, and now some greasy non-woman is whining at the people who are obviously concerned about it. I can't reverse the trauma inflicted upon that child, but I sure as hell can voice my thoughts about it. Go back to that transgender circle jerk sub that you seem to frequently visit and maybe stop lurking on subs that aren't meant to stroke your ego or your fetish, timmy. 🥱

This is literally a sub for gender issues and you are whataboutisming the part of the story that's a topic for elsewhere.

This man violated a child, and he was caught by the law. It's an unfortunate reality of life sick people will exist, but thankfully we have professionals who attempt to safeguard the public from them.

There is little discussion on the system working as intended.

However, what's worthy of discussion is where this article indicates the system will fail. This individual is making no effort to transition but is claiming a gender that will likely see him placed in prison among vulnerable biological women, who he could easily overpower. The fact that his crime is a sex crime against a vulnerable party physically weaker than him gives one a reason to fear his intent in declaring himself female in terms of prison sentencing.

This is a failure of the system that will see a vulnerable group targeted and abused by known abusers in a setting where they will have no way out. Something California is preparing for.

You realise that trans people aren't driving up rape stats it's mostly cis people and CIS man can easily motherfucking rape. When women rape and get caught and handed a sentence they don't get the easy way out... Literally a child was hurt and you're using this as a flawed argument for your obsession with trans people. Give me a single source that shows trans people drive up rape stats.