Displaying results 1 through 50 of 5157 entries found. 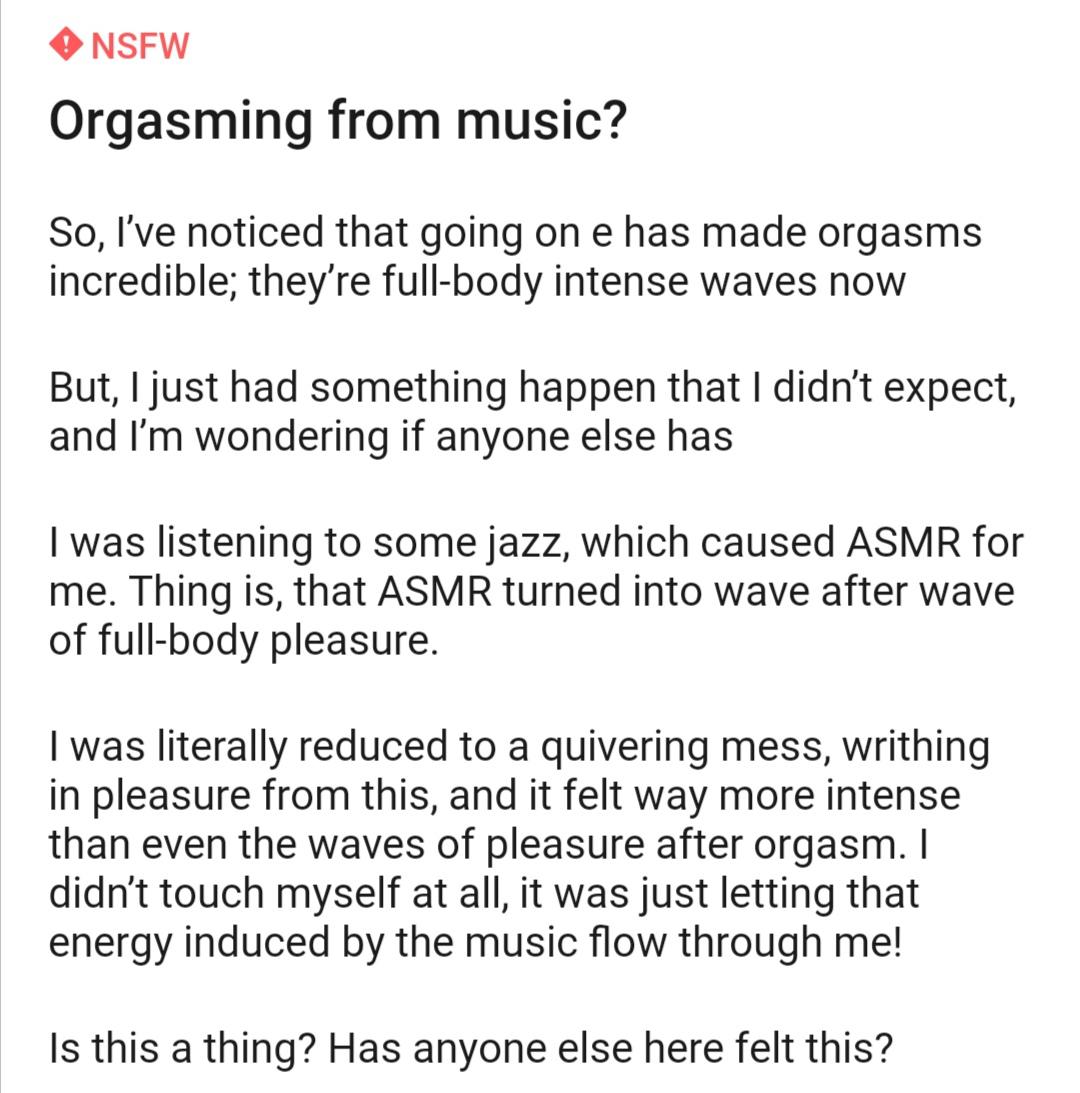 GenderCritical is gone, I got permanently banned from GC debates QT for saying transwomen arent women, and posting here gets you banned from the whole site
Submitted by [deleted] on June 29, 2020, 3:09 p.m. 1 point | 1 comment 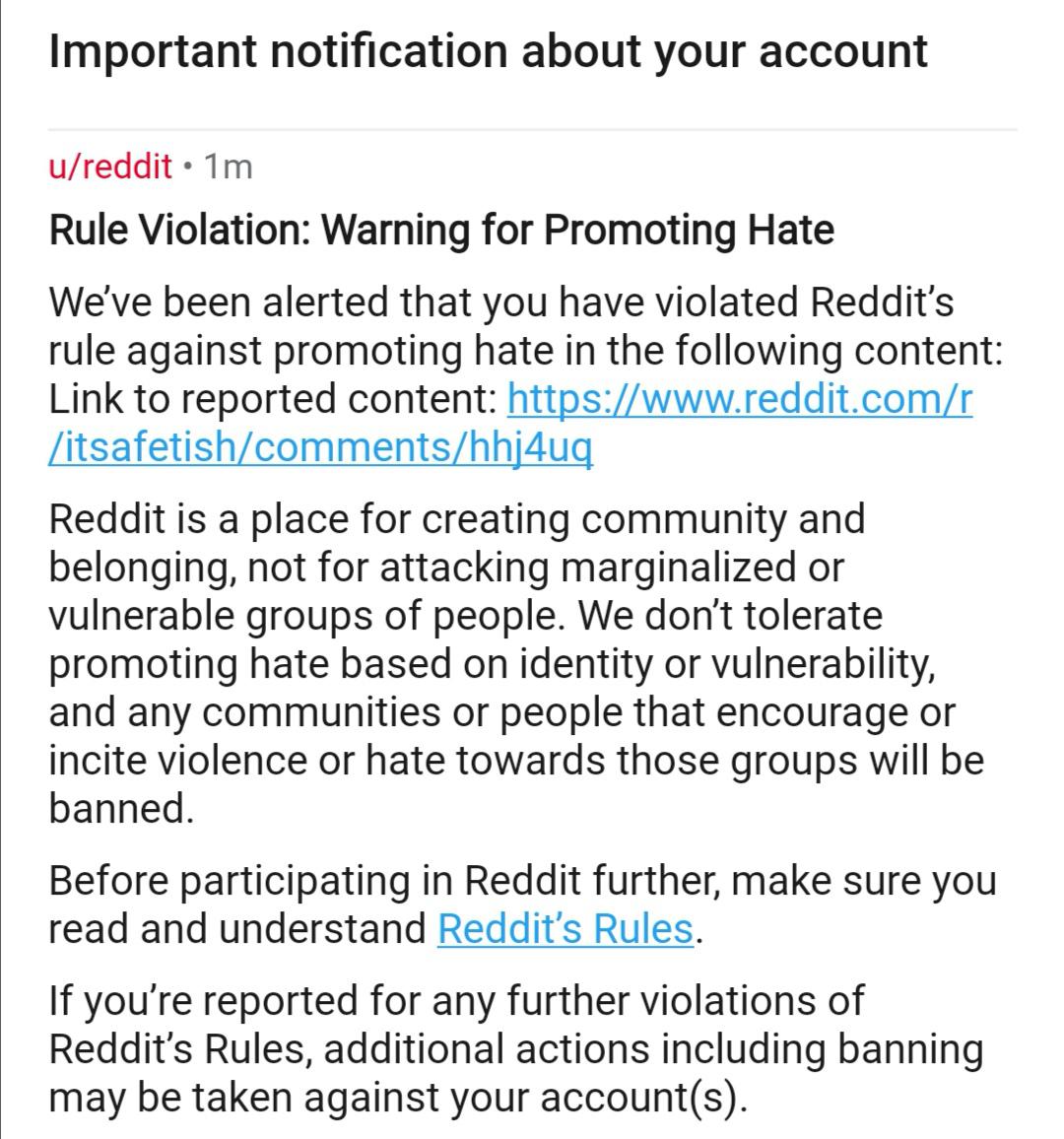 [META] Anti evil operatives? is the sub in danger? there's been rumblings of a new sub banwave on the basis of hate.... this is new, isn't it? should we tighten up some of the rules? what do? despite what the other side says, we try very hard to not break any rules here...
Submitted by sunkenrocks on June 29, 2020, 1:25 p.m. 21 points | 12 comments 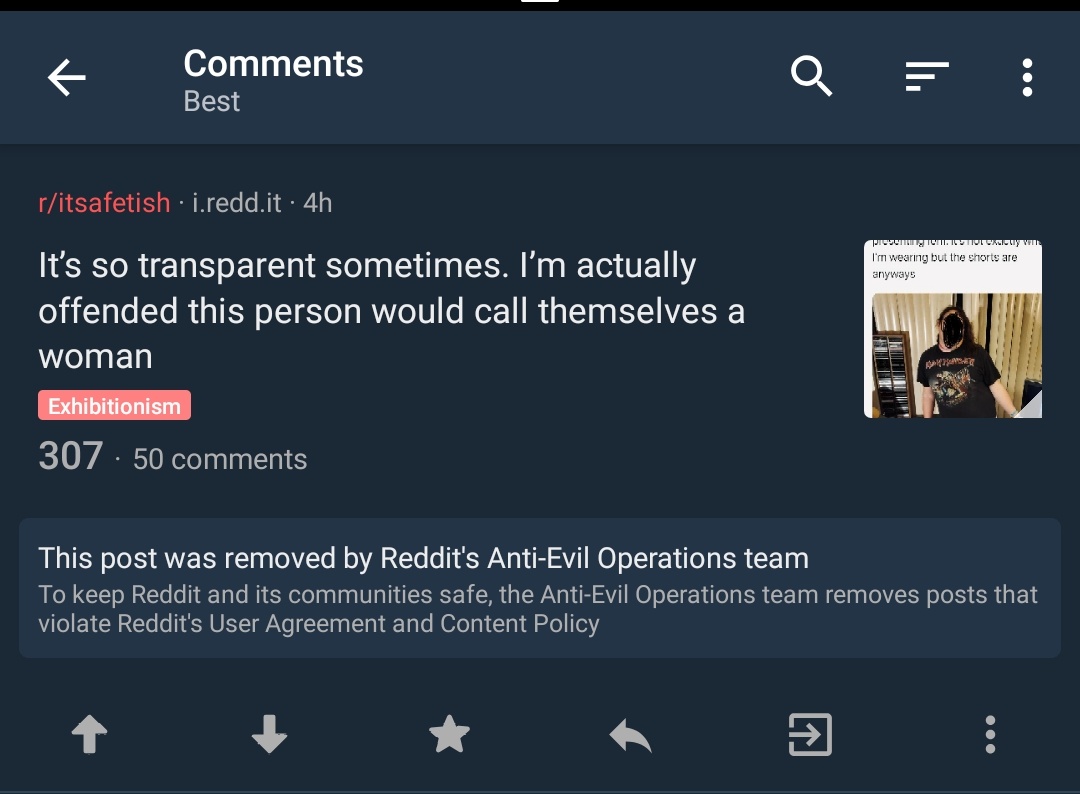 Y’all we are likely coming up.

If you can still see this, you can follow us on Twitter at @rItsAFetish or @rGenderCritical for updates as we decided our next steps.

It’s so transparent sometimes. I’m actually offended this person would call themselves a woman Exhibitionism
Submitted by secretterf on June 29, 2020, 9:03 a.m. 307 points | 51 comments 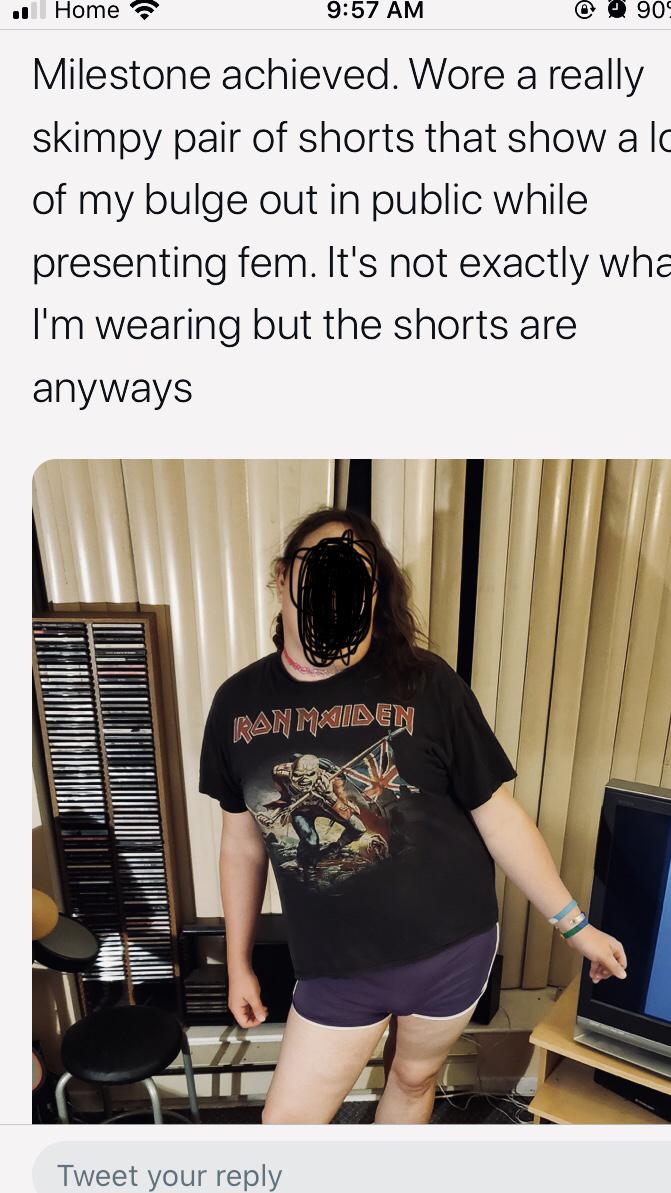 (If this is against the rules, let me know, and I can try to find a more appropriate sub for it; also I'm using a throwaway as he knows my main account name.)

One of my good male friends from college has always struggled with mental health issues, and it's only gotten worse due to the quarantine making the last part of the school year all online. He slowly talked to me less and less, and spent more time on leftist twitter and seems to be buying it hook, line, and sinker. In his twitter bio, he put "she/her" pronouns, he apparently has started wearing dresses, and he broke up with his girlfriend because she's straight. The sad thing is that I don't even think it's "pornsickness" that's doing this; he's just been told by every single "woke" outlet out there that all of his mental health struggles are due to "dysphoria", and that transitioning will fix his life and make him happy. Hell, in college I thought he was one of the good guys, who had a stable relationship and detested the frat & hookup culture -- but now he's falling for this. I just want to talk him out of it before he permanently ruins his body, and convince him to see a non-gender-confirming therapist, but I don't want all of my woke friends from school to burn me at the stake. Any advice, friends? 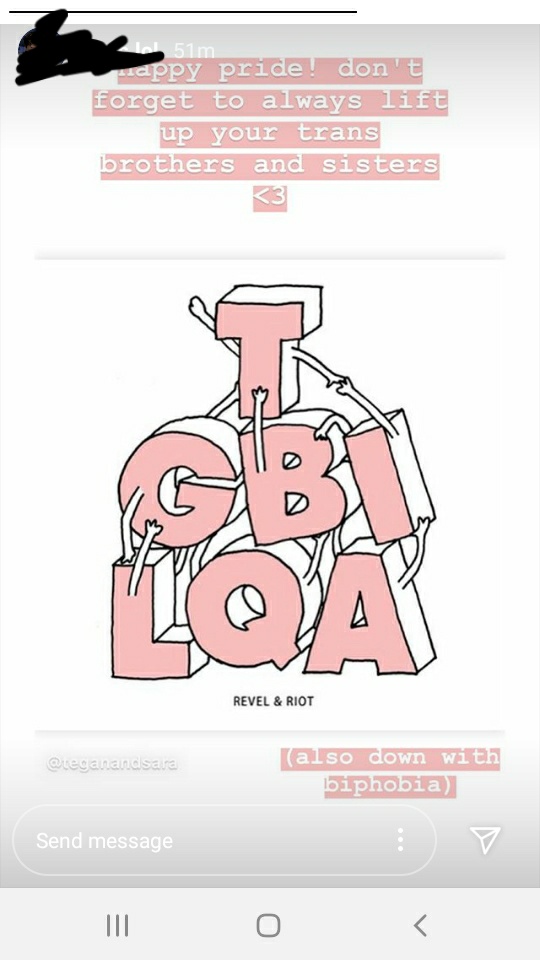 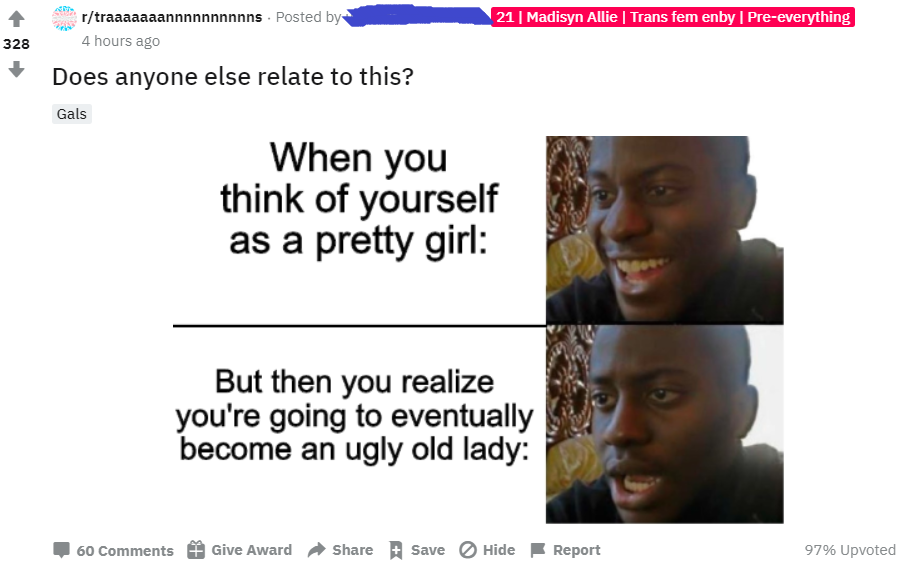 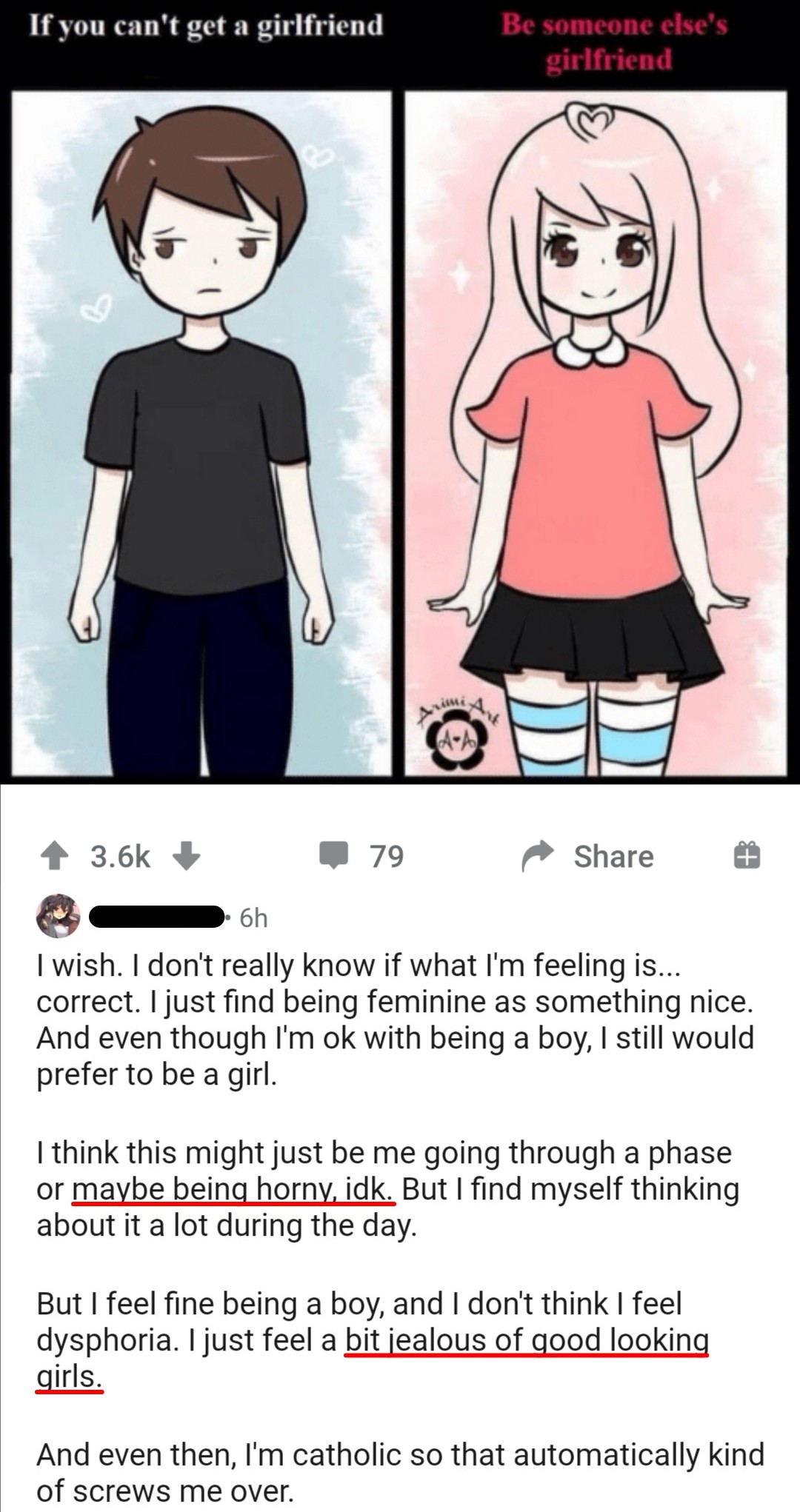 Not getting huge “dobonhonkeros” means you haven’t lived life to the fullest Anatomic AGP
Submitted by mysupercoolsecretalt on June 28, 2020, 12:58 p.m. 124 points | 9 comments 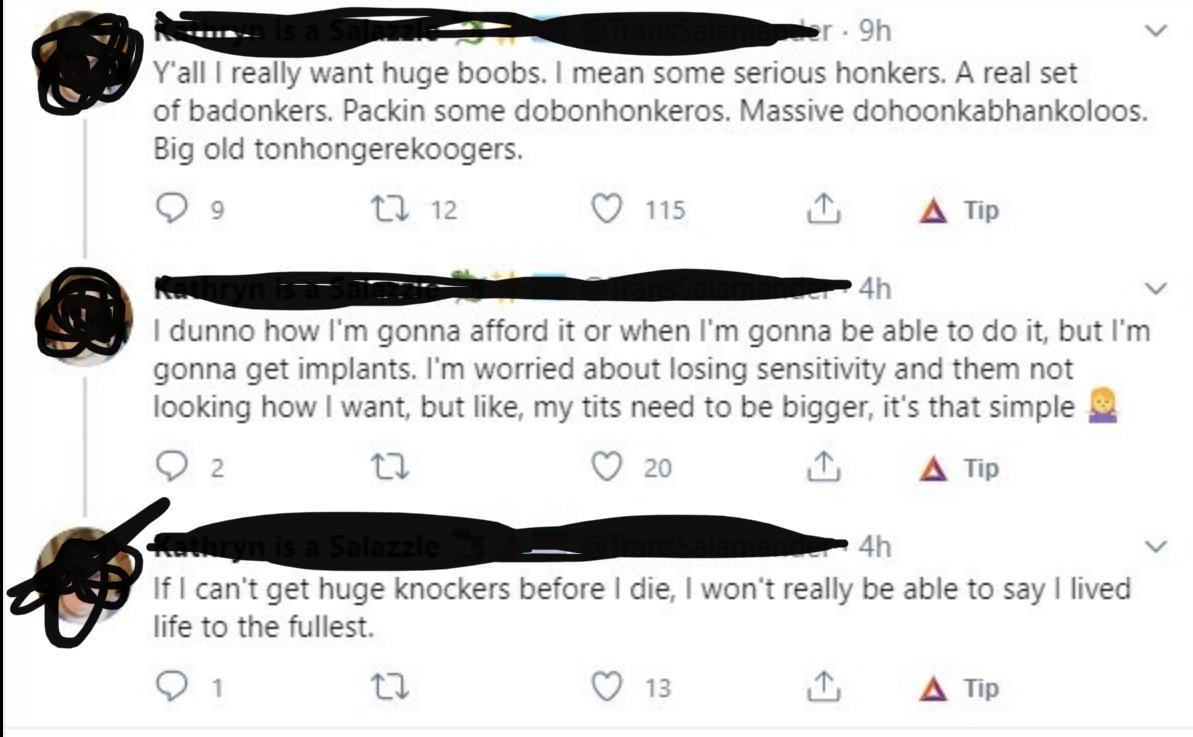 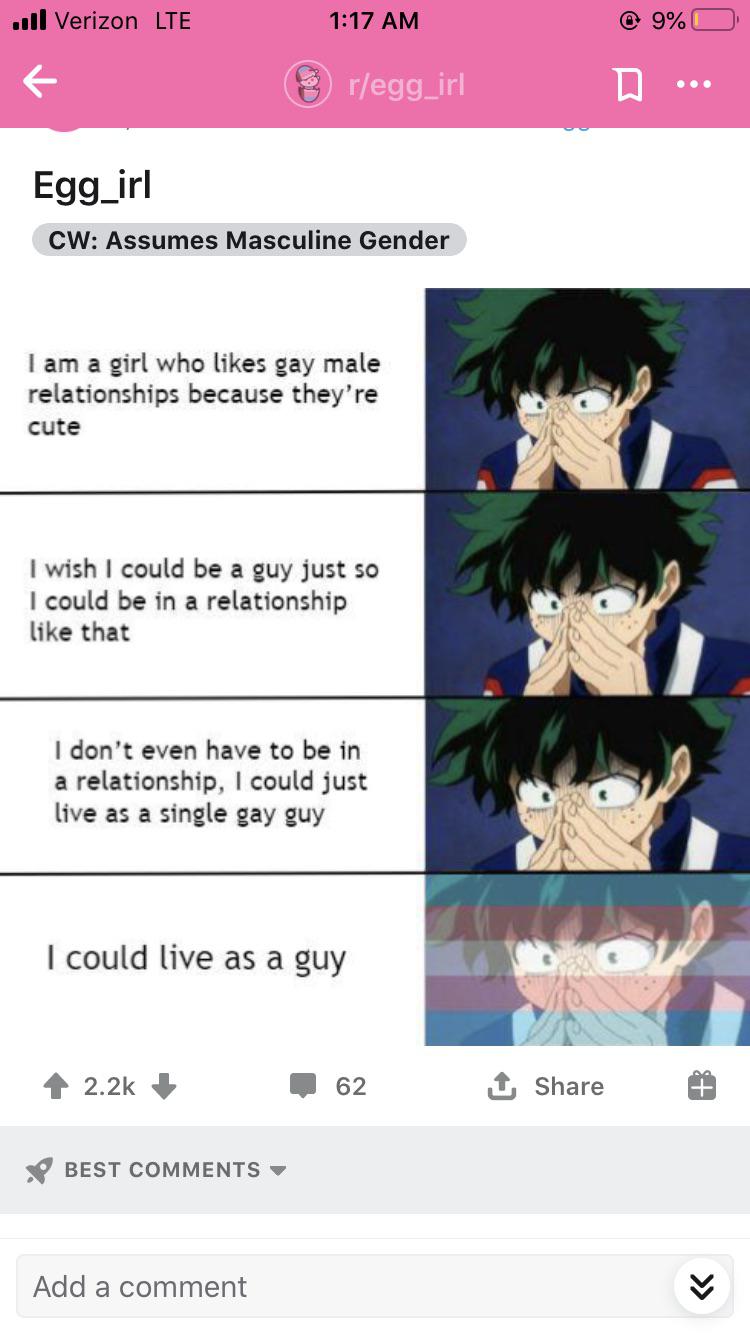 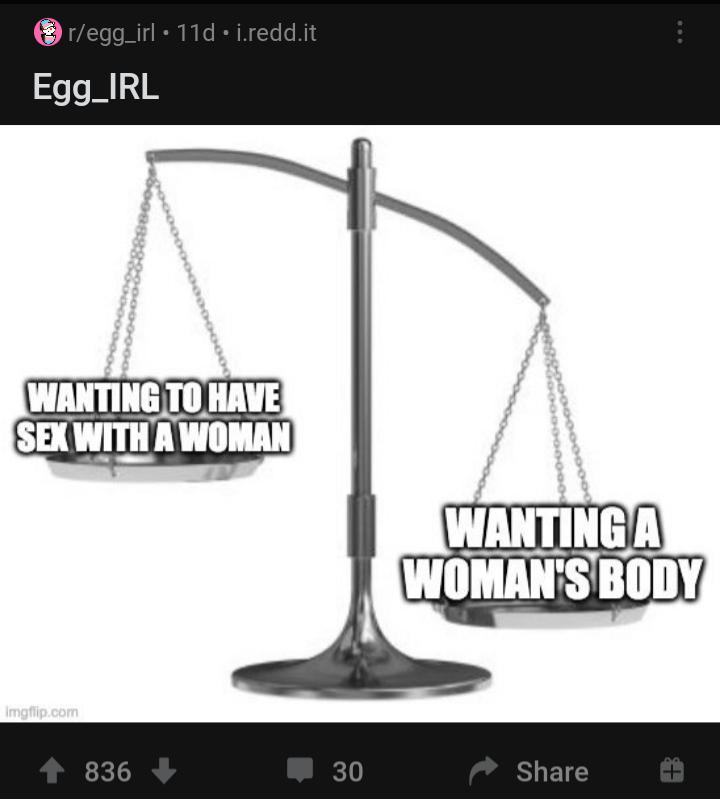 I need to get this off my chest. Throwaway because I'm new to this peaking shit and honestly so confused and definitely disoriented after being so oblivious to this stuff for the longest time.

I'm new to the company, only been there a few months. I am the youngest by a lot. There's a group of four women who make up the next tier of youngins and they're all low-mid 30s. They've been really sweet, probably recognizing their position as my closest demographic. When we were still at the building (all work from home now), they'd come check in, make some small talk, etc.

But there's one of them, Amy, who has always been a bit different about it. She is clearly trying hard to be my friend, and is pretty relentless, especially considering my reaction. Now, I will mention here that I'm pretty sure I am a somewhat unlikable person, at least in terms of demeanor. I really do just prefer to do my own thing and likely come across aloof most of the time. That being said, I still appreciate the sentiment of trying to make the new person feel welcome, and with the other women, I do recognize the sincerity. But for Amy I can't help but feel that she has this thing wants, which is to be my friend, and she can't reconcile it with the wants of other people, e.g. myself and how I clearly have zero interest.

I could never understand why she was trying so hard, considering that basically the only things we have in common is that we work together and are women. She's married (lesbian), has a house, settled down. I'm a part-time student and, again, a bit standoffish. Not only does she message me about the most random shit, trying to get conversations going, she also invites me over a lot? Dinner, tea, whatever, she always offers. And it was always so odd to me because we are not at all at that point. I mean I know age is just a number, but it'd definitely be the exception, not the norm, for me to become that acquainted with a 35-year-old, and if I did, it would certainly not be within the first week of knowing each other. Which is when she began to mention coming over.

For a bit, I really did think it was just her personality to be super social. But I gradually came to realize (belatedly, as I'm not up to par with social norms in general), that this, like, was not normal. As I said, we've nothing in common, and are at completely different stages of life. I briefly considered that maybe in her head she's like, "Ah, somewhat angsty 20-year-old, maybe I can help this girl out," but it really doesn't come across that way at all. Her recent completely unsolicited suggestion was that I should "come over so we can gossip," and was talking about how she can make cute drinks and we can sit by her pool and joking that she'll make it all "glamorous." It was seriously so weird. I DO NOT come across as this type of person. Like, I wasn't sure if that's who she thinks I am, or if she's just completely oblivious to other people's interests in general. And all her other offers to hang out don't seem in any sort of "big sister" way or whatever, but just trying to be friends and equals.

So here marks the wild and sudden recalibration of my leftist ass. It was maybe two weeks ago when I briefly came across GC ideas. I never really made up my mind on them; I did feel like I couldn't shut it down completely (especially looking at LGBDropTheT), but I did eventually forget about the argument. TERFs were still the enemy. Then yesterday, I was Facebook digging, for no particular reason (certainly not because I expected to find what I did), and discover that Amy used to be a he. Now, because I am a dumbass, I saw it and was like, alright cool. It took me until the next day to click everything, when she pulls the situation I outlined above. I remember seeing her messages and literally saying out loud to myself, "I don't get why she likes me so much." And then everything fell into place from there.

I honestly feel sick about the whole thing. I really am so new to this stuff, and there's still that part of me that's like, 'What if I'm so, so wrong. What if gender essence really is a thing.' But I keep coming back here, and to GC, and I just feel like I can't unsee it. 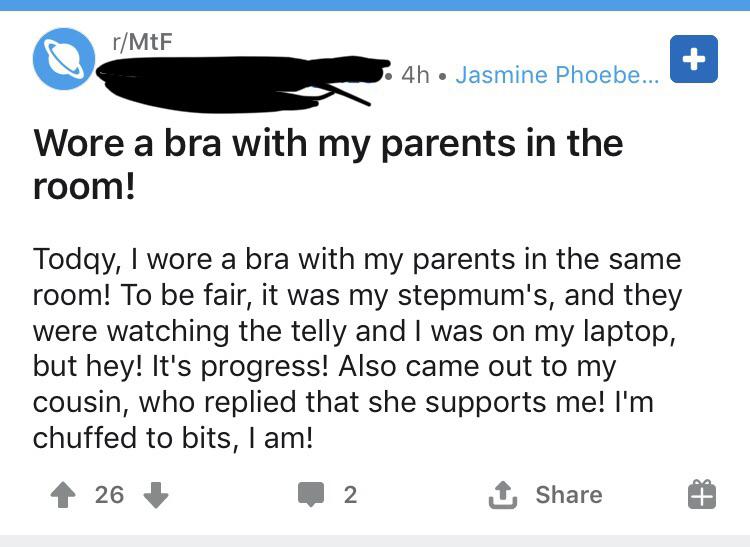 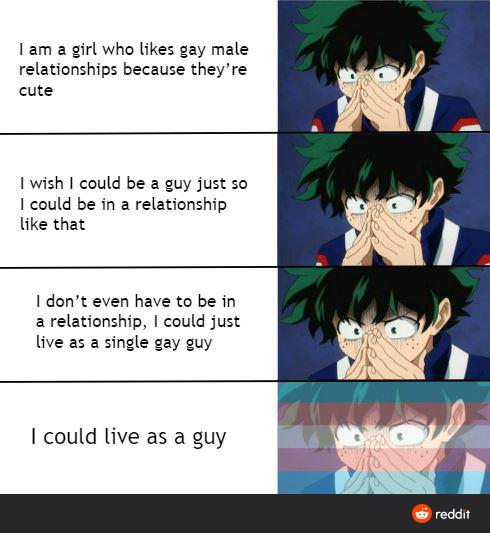 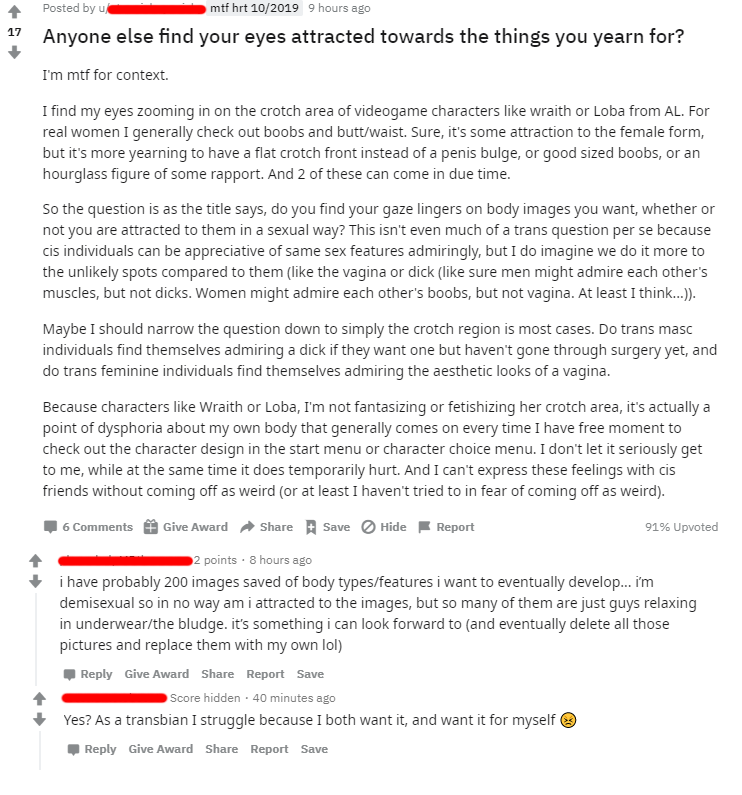 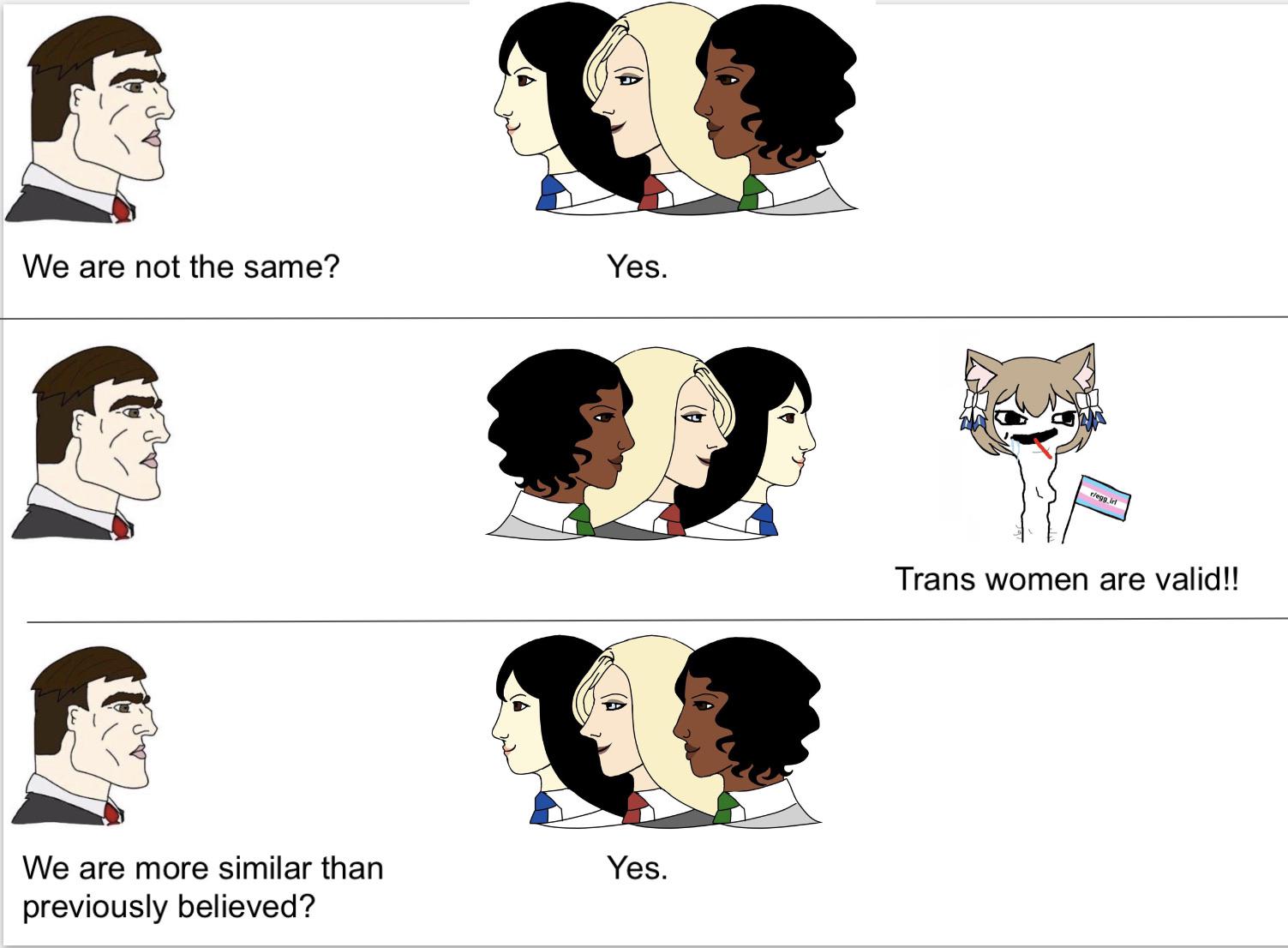 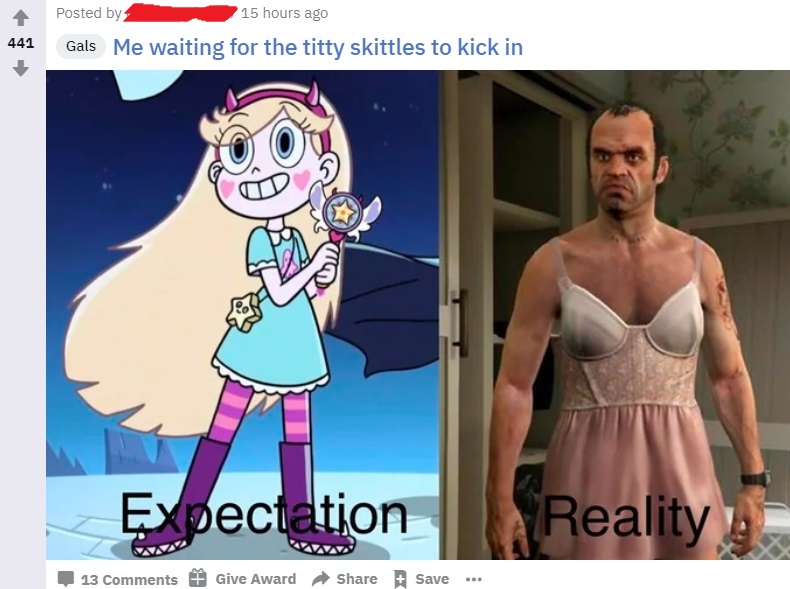 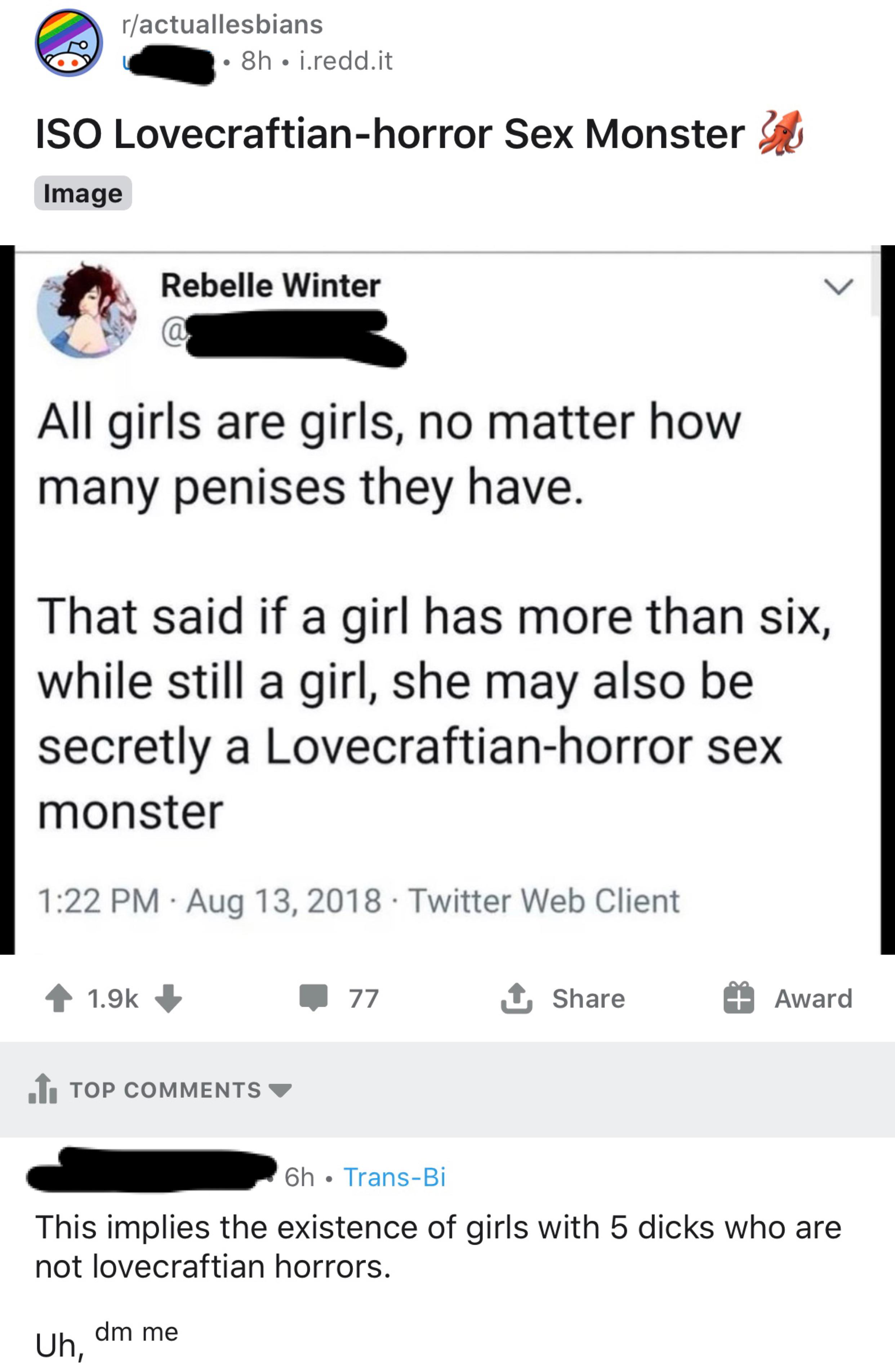 Just wanted to post this here to see your opinions. Remove if it's wrong or anything. 4 is way too young to know if you want to be the opposite sex, you haven't even experienced being the gender you are born with yet. I don't agree with puberty blockers at all in a transitional sense.
Submitted by _Probably_Not_ on June 26, 2020, 5:23 a.m. 90 points | 38 comments 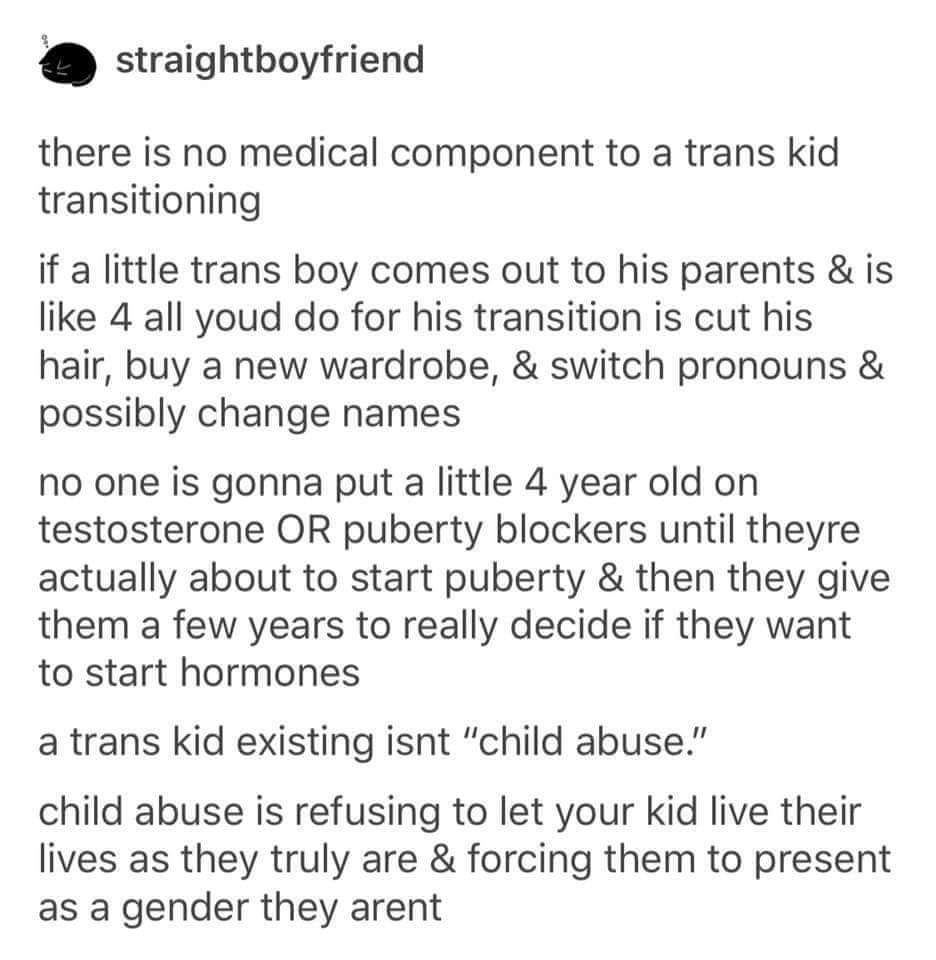 My childhood experience with one of these types online... Transvestic AGP
Submitted by cherryjellybean on June 25, 2020, 10:33 p.m. 24 points | 1 comment
https://www.reddit.com/r/itsafetish/comments/hg08kd/my_childhood_experience_with_one_of_these_types/

TiM brags about fooling lesbians with his stink pit. Bonus points for claiming it tastes and smells better than a real pussy. Gynos cant even tell! Narcissism/Narcissistic Rage
Submitted by GypsyDanger_1013 on June 25, 2020, 7:05 p.m. 471 points | 125 comments 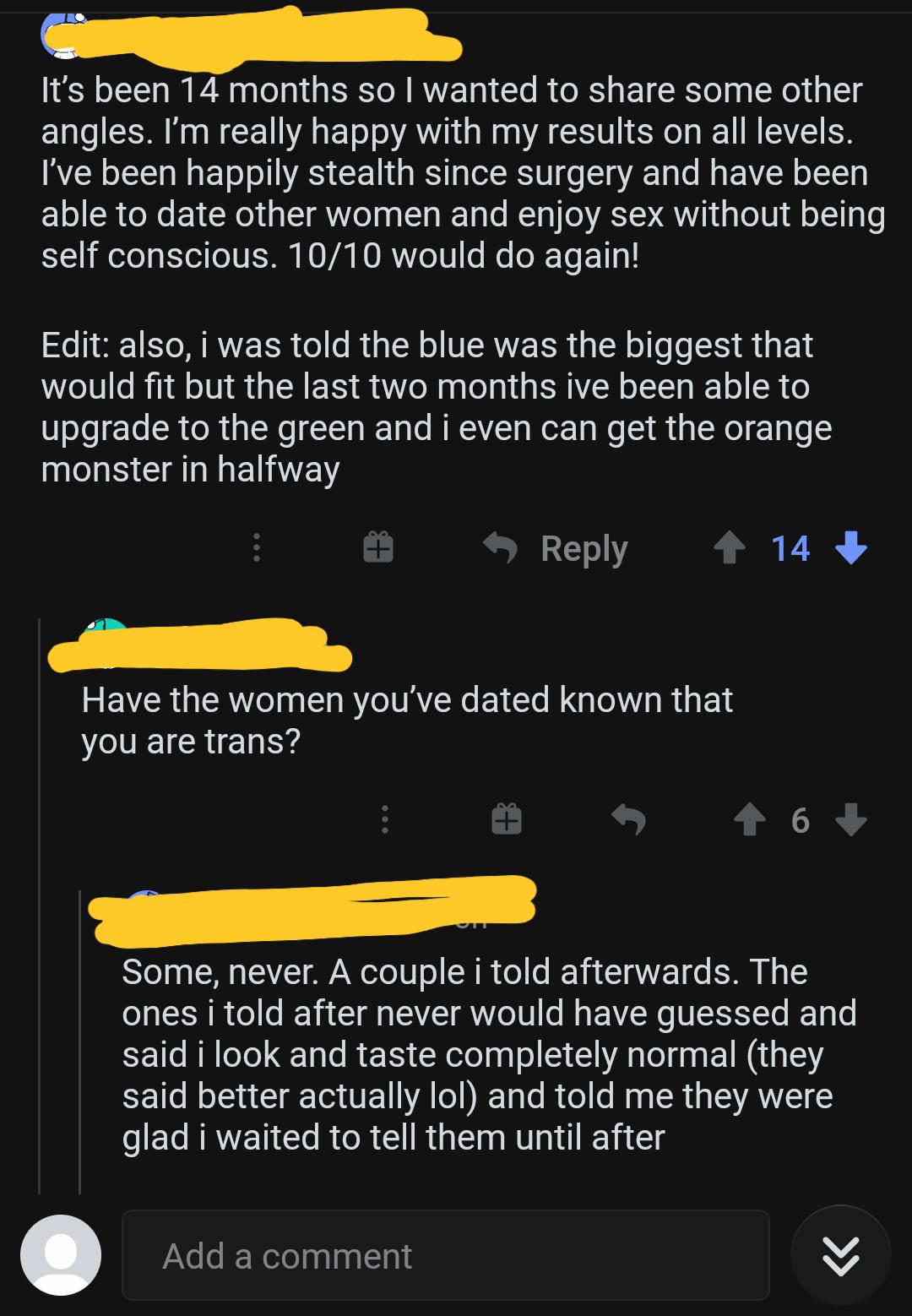 Identifying into a globally oppressed class: it's as easy as painting your nails and putting on some panties! Behavioral AGP
Submitted by TrainingBluejay on June 25, 2020, 6:43 p.m. 139 points | 5 comments 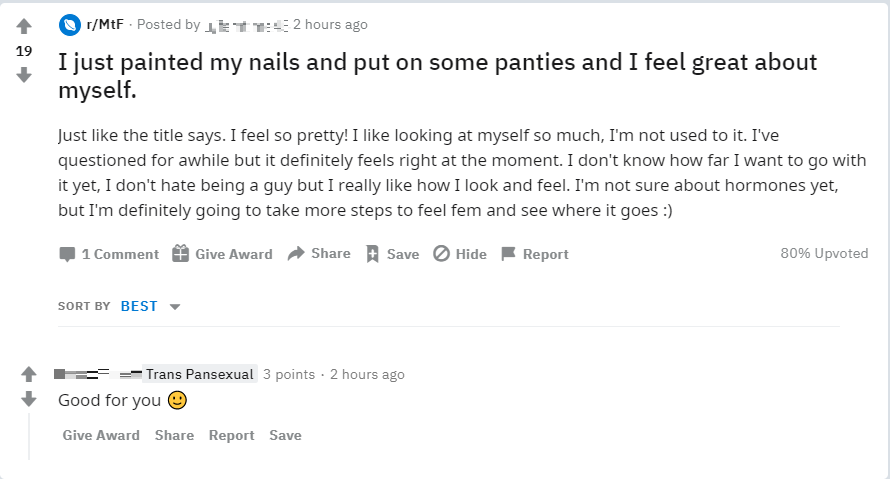 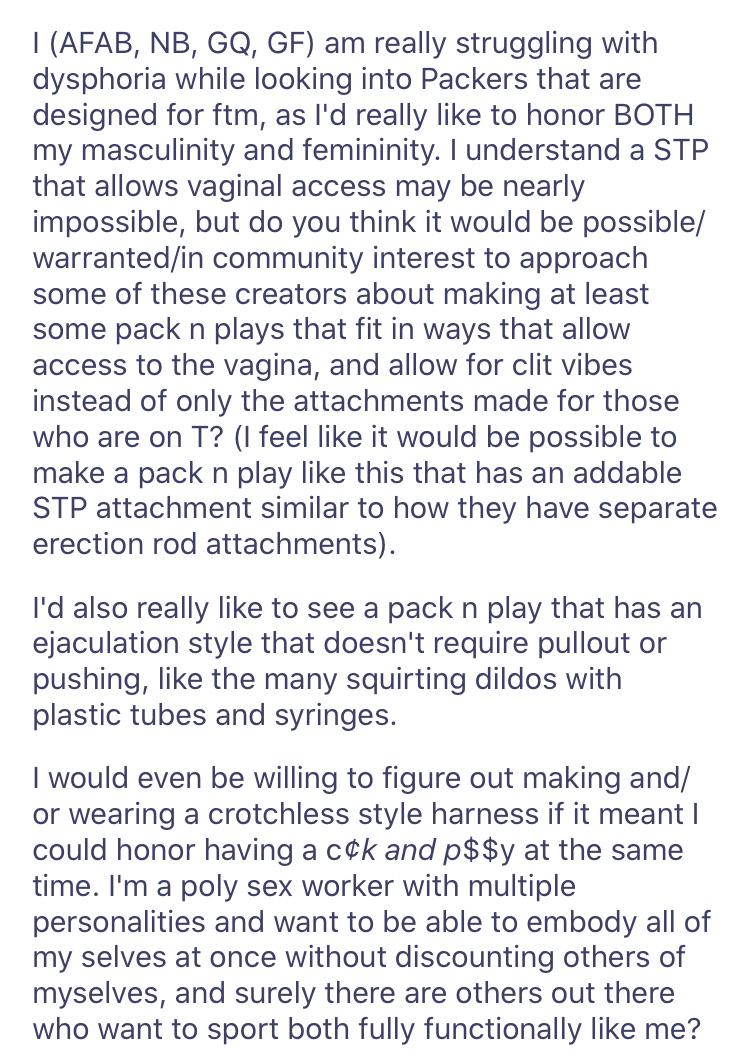 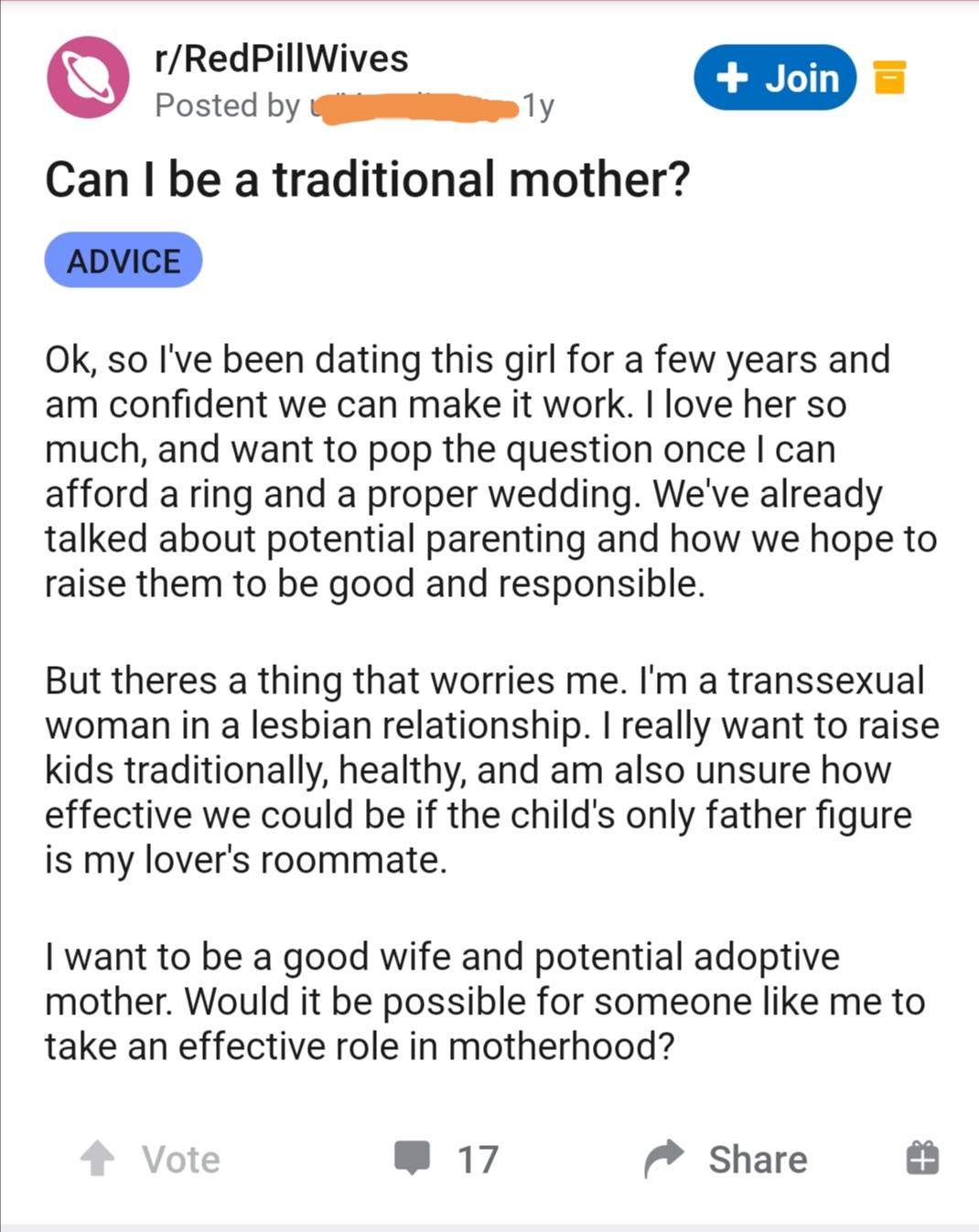 The line between their "gender" and sexuality is so blurred that it's nonexistent Envy Attraction
Submitted by terfdotcom on June 25, 2020, 10:38 a.m. 206 points | 17 comments 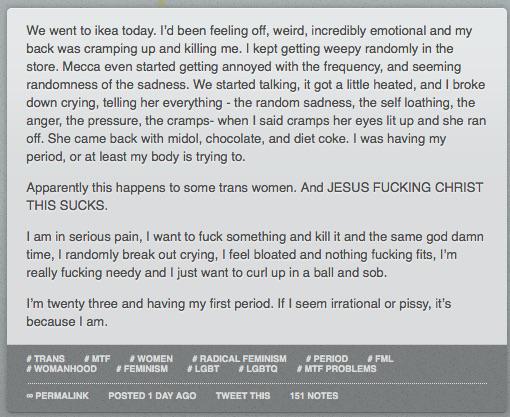 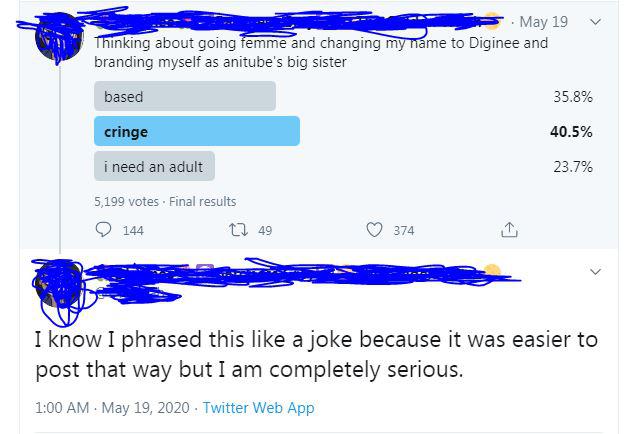 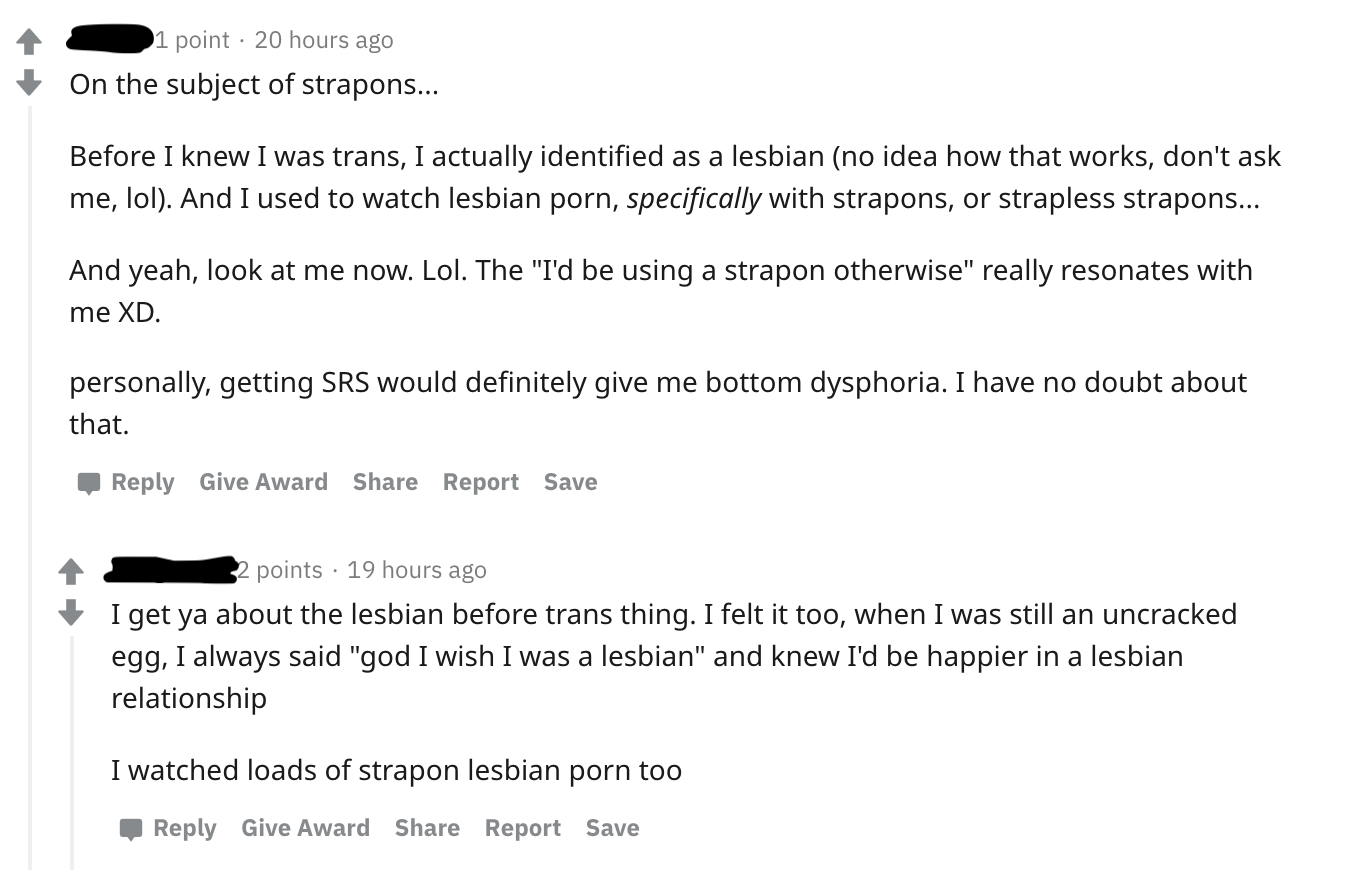 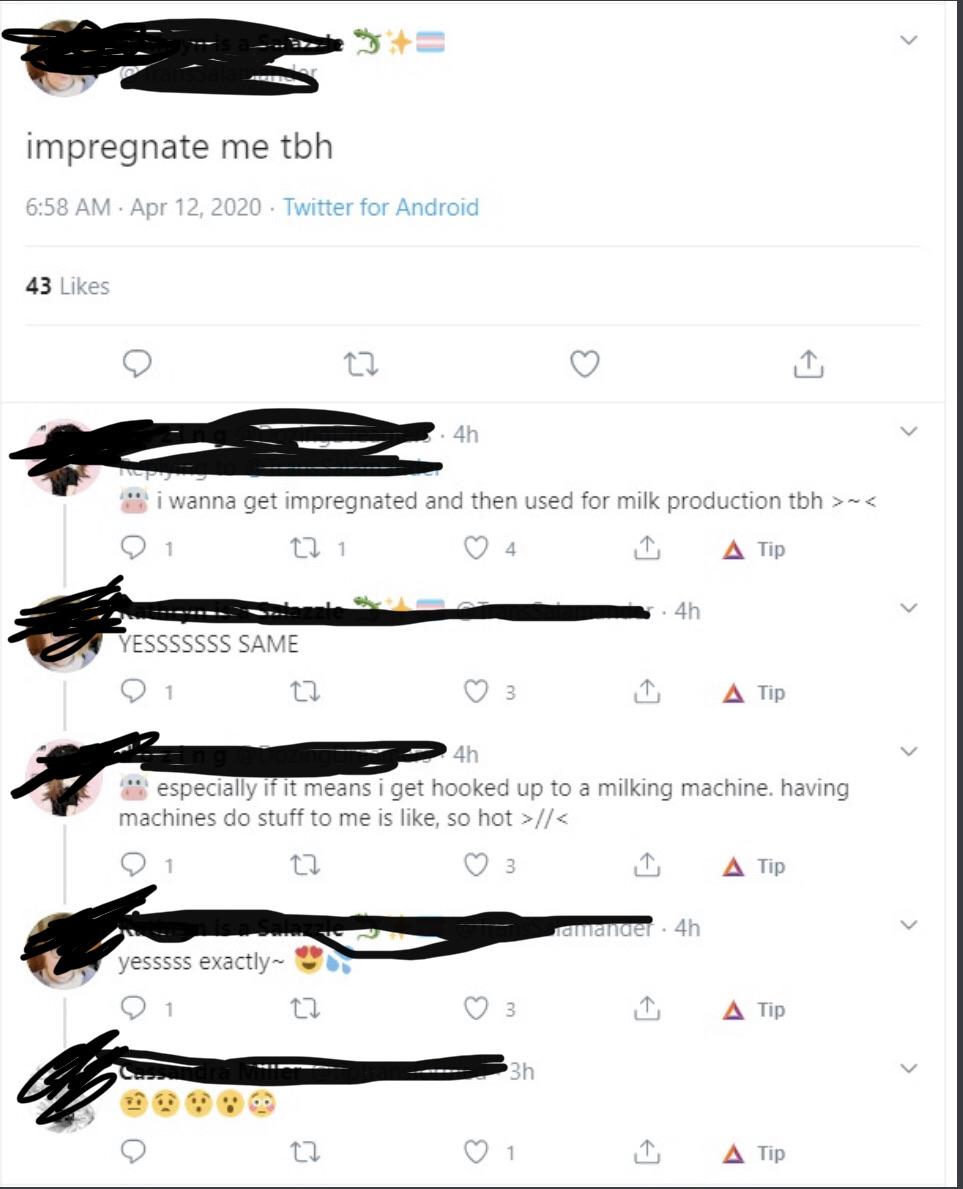 Tonight, on Whose Line is it, Anyway: are the people sexualizing dental hygiene in this thread women (who just happened to be born in male bodies), or straight men with an extreme body modification kink? Anatomic AGP
Submitted by TrainingBluejay on June 24, 2020, 5:30 a.m. 533 points | 53 comments 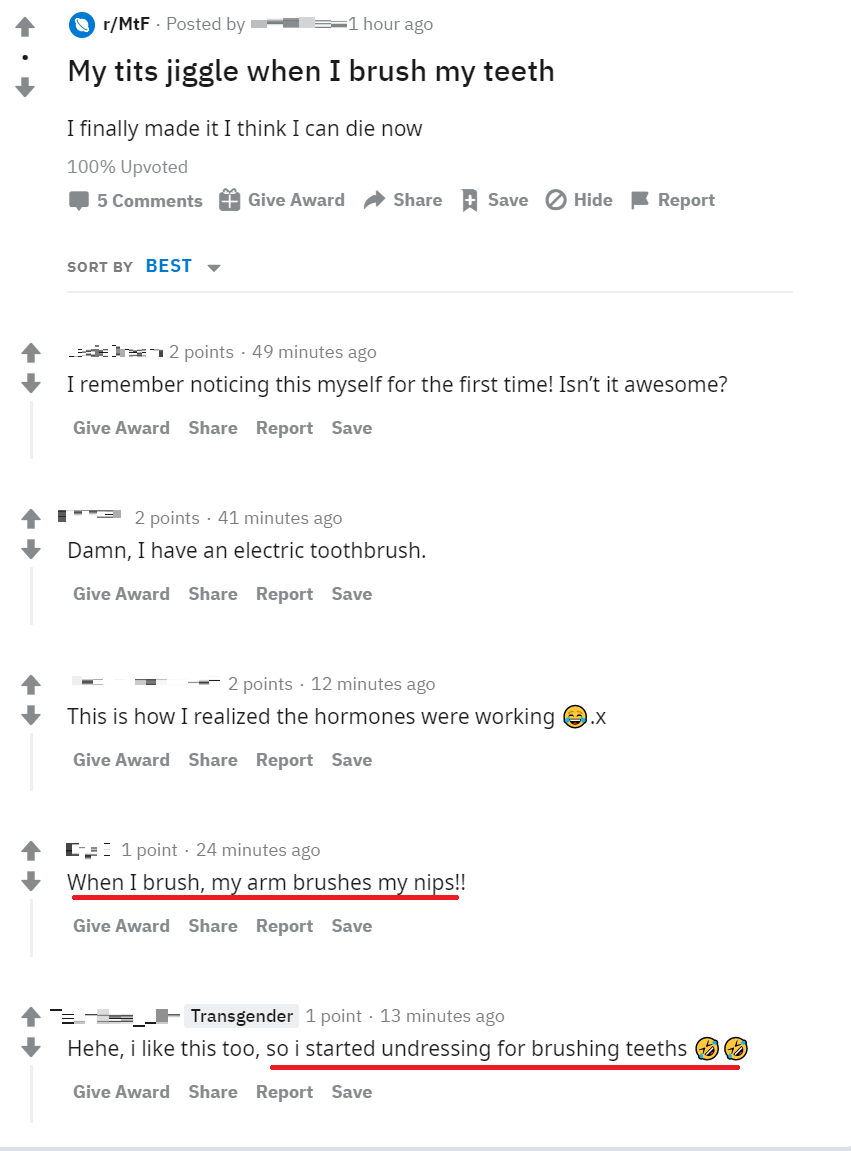 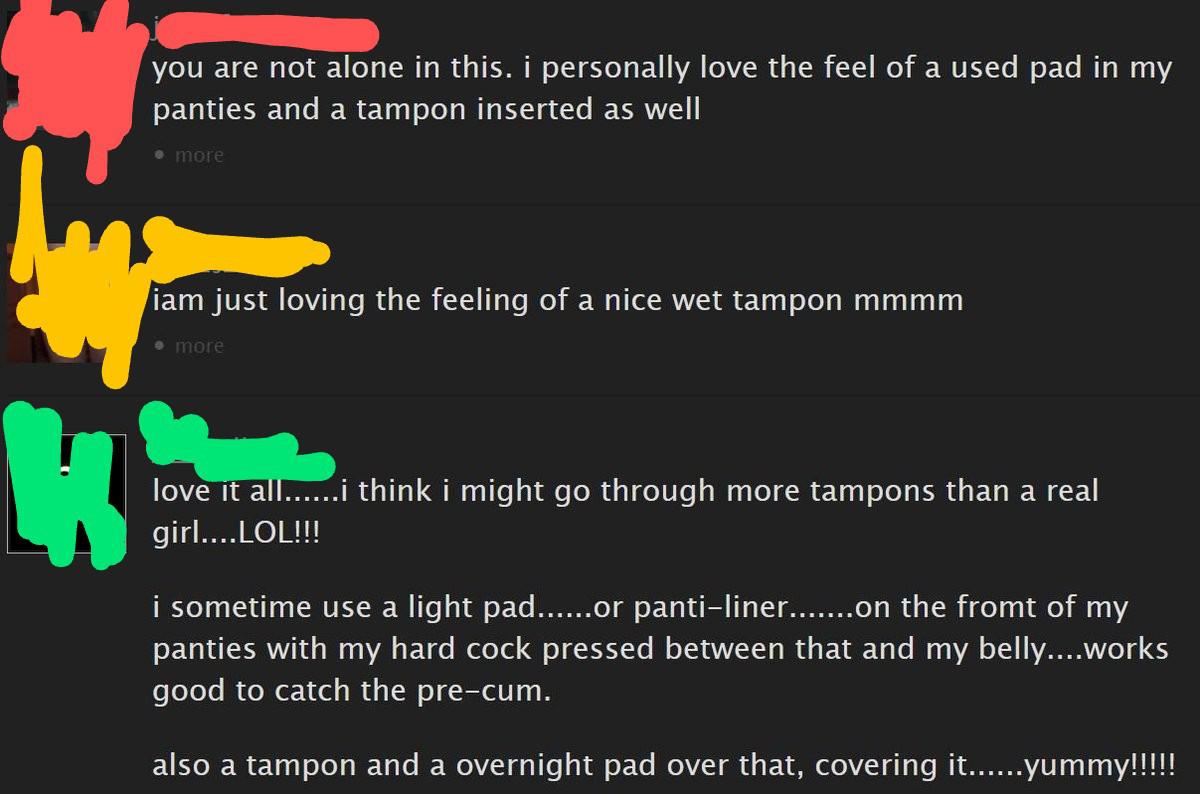 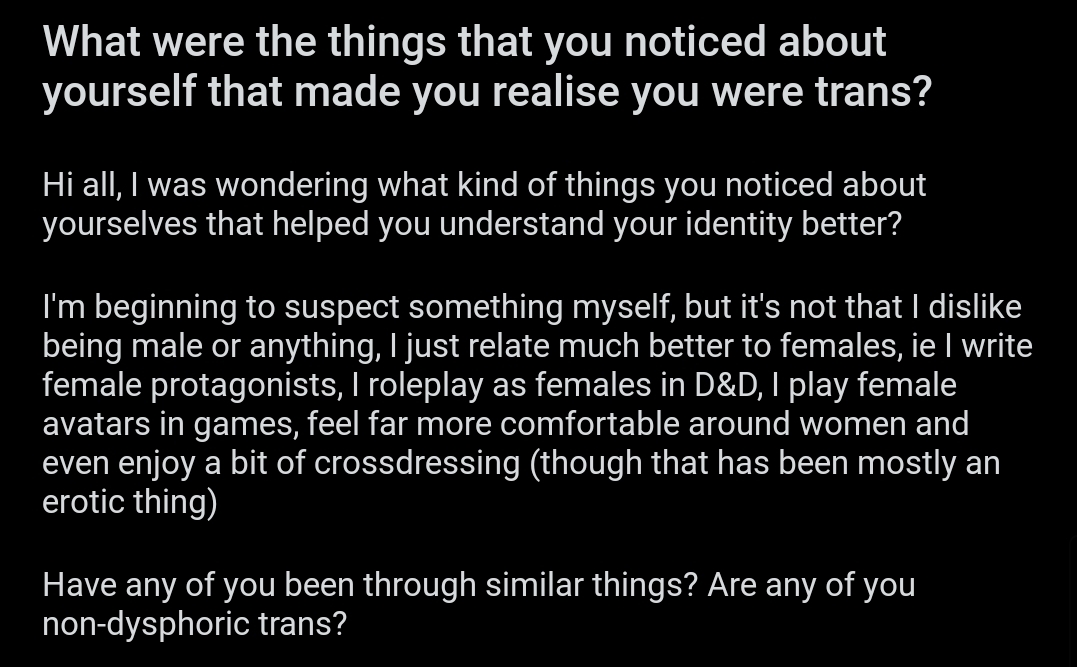 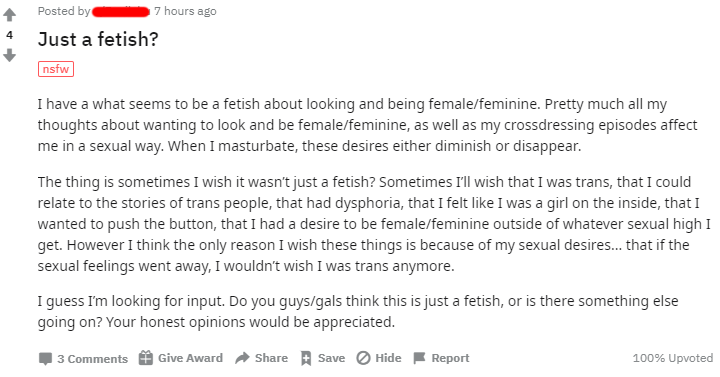 I am so fucking tired of seeing these cretins all over the various "dating" apps. Behavioral AGP
Submitted by LordFapnapkin on June 23, 2020, 4:57 a.m. 1 point | 1 comment 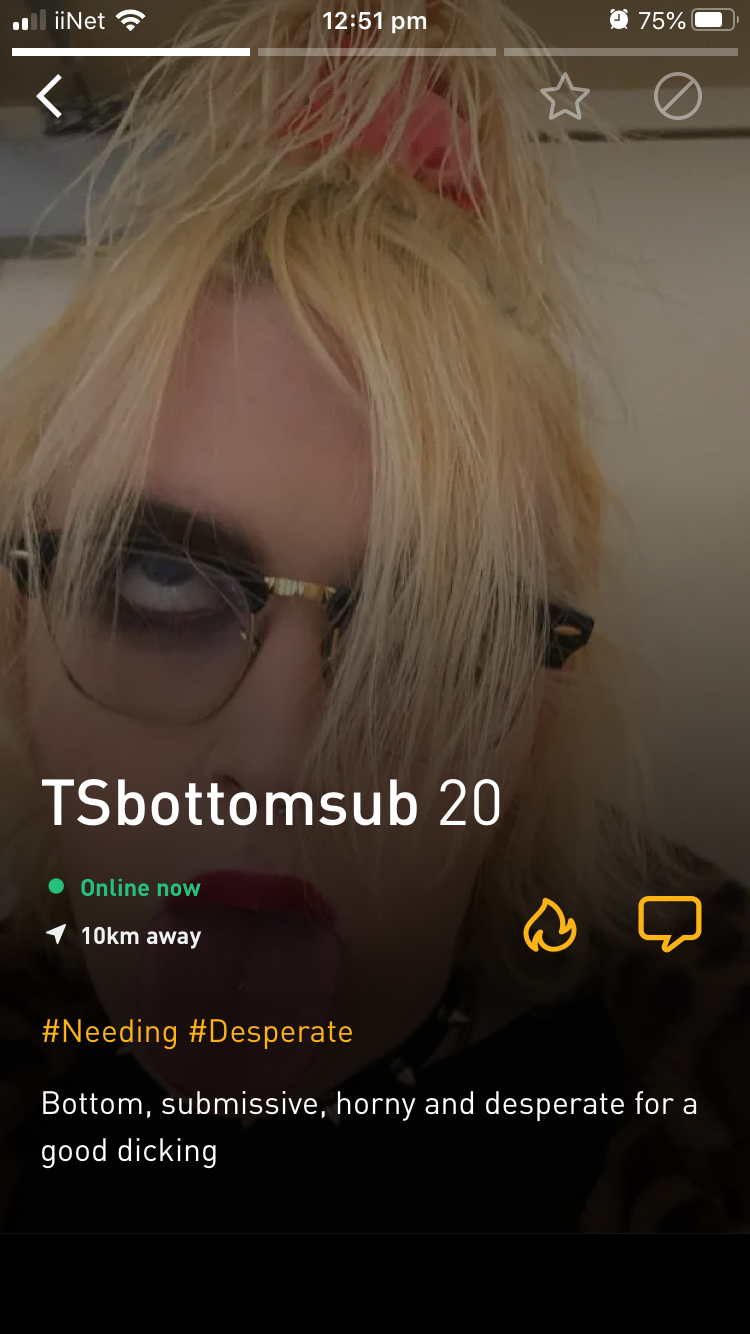 The comment section is a shit show. There is nothing that women do, say or experience anymore that doesn't offend trans people.
Submitted by smiolet on June 23, 2020, 1:33 a.m. 152 points | 40 comments
https://archive.is/sicJh

So... I’m glad I found this sub because this is what I’ve been saying about my “trans brother” since I was a kid (trigger warning: incestual assault) Admiring/Masturbating to Feminized Self
Submitted by AnnetteDontForget on June 22, 2020, 5:06 p.m. 1020 points | 91 comments

To start, I’m estranged from family for being “transphobic.” My brother has been molesting me since we were kids and it got worse when I became a teenager and developed breasts. Just constantly sexualizing my body. Often broke into the bathroom to ridicule me and sometimes snap a surprise photo.

My parents always told me I was “being dramatic” and that “boys are curious about women’s bodies.” I’m asian American and culturally, boys are favored. I ended up attempting suicide twice and running away several times.

I’d always end up in the mental hospital and sent home with meds. Every time, I could tell my brother has been through my clothes and wore them, especially my skirts.

Eventually I left for good, because my brother threatened to kill himself based on my “slander.” My mom found me on social media a few years later and I learned they paid over 6 figures for his transition when I was homeless for a good two years.

No shit, his therapist has the whole family in family therapy and they all need to “reframe” any negativity or criticism of him because he’s “high risk” for suicide. LOL. She wanted me to come to a session so my brother could have “closure” for all of my “accusations” and so the therapist could “teach me” how accept “her.” I said not until the molestation was addressed and she taped me “misgendering” him and tells everyone I’m transphobic.

He now is some Instagram wannabe celebrity who poses as biologically female with “hormonal problems” and “infertility” while posting all bikini pictures of himself. The captions are sickening - “body dysmorphia ♥️♥️♥️” and “be anorexic ♥️♥️♥️” since he believes this is what makes a woman a woman. He has always watched Victoria’s Secret fashion shows and loved tumblr people that glorified eating disorders, too. I remember him posing with the models and forcing the family to watch with him while he acted out each catwalk.

(If there are any subreddit’s for victims of trans people, please let me know!)